Camp Na-Ha-Ra was just one of many ways people enjoyed their summers in Bethlehem, New Hampshire. Camp Na-Ha-Ra  was a camp for under privileged youngsters and adults suffering from hay fever. This camp was started by the National Hay Fever Association. The association acquired funds to buy a 100-acre farm in the late 1920s. This farm was transformed into camp Na-Ha-Ra. [1]

The adults at camp Na-Ha-Ra attended mainly  for hay fever relief rather than camp games. There were some activities for adults to take part in but very few. [2] The adults at this camp were there  because the camp offered cheap housing in a place that eradicated their hay fever symptoms.

Children frequented Camp Na-Ha-Ra for hay fever relief and summer camp activities. At the beginning of the summer the children would split into two teams. These teams would compete against each other in various sports all summer long. When summer came to an end and the camp was closing, one last banquet would take place. At this banquet the winning team would be awarded prizes for their victories. [3] 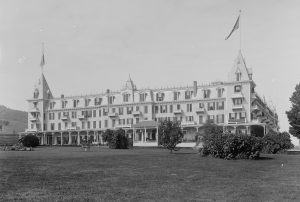 Bethlehem was famous for it’s hotels. These hotels were a safe haven for people with hay fever.

Hotels would be advertised year round. During the late 1940s advertisements were placed for hotels in the mountains of New York, Pennsylvania, Maine and New Hampshire. These hotels lauded themselves as health resorts. During the 1950s there was a geographical shift in the hotels being advertised. Hotel locations started to move south and towards beaches.[5] With the booming post- war economy and families having cars, people wanted to travel closer to home and for shorter periods of time. [6] This progression in advertisement showed the trend of luxury hotels on the horizon. People started taking vacations for leisure instead of health. This impacted remote tourist towns the hardest in the 1960s, when many people started taking vacations to beaches instead of the mountains.