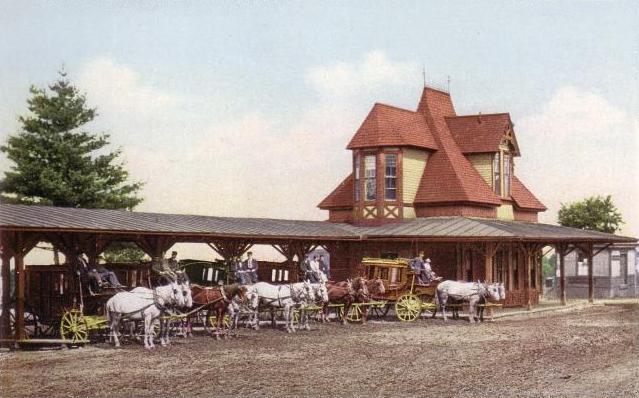 The White Mountains were famous as a refuge for writers such as Nathaniel Hawthorne, Ralph Waldo Emerson, Henry David Thoreau and others. After the Civil War, beginning particularly in the 1870s, Bethlehem’s fame as a resort town for health, leisure, and recreation grew. The economy of the town began to expand to suit the upper-class visitors who came to find relief from the aggravations of hay fever and urban life. In September of 1874 the U.S. Hay Fever Association met in Bethlehem for the very first time– a gathering made up largely of white men employed as lawyers, judges, physicians, prosperous business men, and “other educated male professionals”. [1]

One of those who attended the first meeting of the U. S. Hay Fever Relief Association was Dr. Morrill Wyman, a Bostonian, who followed in the footsteps of the British physician Dr. John B­ostock. Both men recorded their yearly attacks of what came to be known as Summer Catarrh (Catarrhus Aestivus) and Autumnal Catarrh, and later, hay fever, Rose cold, June cold, and hay asthma. When first he spoke about Autumnal Catarrh to his fellow physicians in an assembly of the Massachusetts Medical Society of Boston in 1866, he found them to be unconvinced of the reality of the condition, saying that they “doubted its existence except as an ordinary catarrh”. Despite prior skepticism, in 1872, after much research into the works of Dr. Bostock, Dr. George Beard, and others, Wyman produced his book, Autumnal Catarrh, a treatise on the causes (both geographical and physiological), symptoms, and treatments for hay fever. He drew his conclusions both from the research of others and his observation of eighty-one cases of what he referred  to alternately by several different names. He found the term “hay fever” to be a misnomer, as the disorder was not caused by hay specifically. In his book, he mentioned both Roman wormwood (Ambrosia artemisiifolia)– known commonly as ragweed, and Maize (Zea mays)– known commonly as Indian Corn, as culprits for causing the condition. [3]

The village rose to the task to accommodate the tastes of guests from different walks of life and “distinguished tastes”. The Grand Hotels allowed the highest tier of guests to stay in the style to which they were accustomed, according to the The White-Mountain Village of Bethlehem as a Resort for Health and Pleasure.

“The chief buildings are of course the hotels and of these there are two, the Maplewood and Sinclair Houses, capable of accommodating between them some seven or eight hundred guests… provide an excellent and abundant table, matter of considerable importance to one’s comfort and well- being, when the appetite is rendered all but ravenous by the stimulating air of the mountains.” [4]

The author of this guidebook goes on to comment on the availability of livery stables, telegraph services, religious houses (including Methodist and Congregationalist), various stores, and a library, making the town a veritable home-away-from-home.  Published in 1880, this guide provides a picturesque view of the town, as well as insights into the relationship between tourists and the local community

There were very few health-seekers that stayed year-round. Despite being a minority, there were those who chose to make Bethlehem their permanent residence. Because “transplants” were the exception, not the rule, it is hard to say whether such settlers helped to soothe tensions between residents and tourists. The most famous of these was the owner of International Harvester (a company that manufactured heavy farm and construction equipment), businessman John Jacob Glessner, his wife, Frances, and their children, who, in 1882 bought and settled on The Rocks Estate. Both land (the estate grew to 1,400 acres) and buildings (22 all told) would be added to this property, and all were bequeathed to the Forest Society in 1978 by the descendants of the original buyers, with the stipulation that there always be crops in the fields.  [5]

[4]Geddings, Wm H. The White-Mountain Village of Bethlehem as a Resort for Health and Pleasure. Boston: Printed by Rand, Avery, &, 1880.